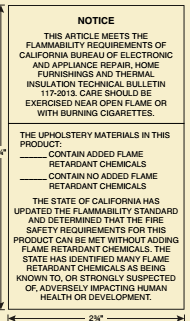 California’s flammability label for upholstered furniture also requires manufacturers to declare the presence of flame retardant chemicals, but it does not require them to say what chemical was used.

In 2013 California changed its flammability standard for furniture so that it would less actively encourage manufacturers to add flame retardant. It also passed legislation that required a label to designate the presence of flame retardants in upholstered furniture.  In the context of a failing regulatory system for toxic chemicals—one that is characterized by long wait times as chemicals are assessed one by one, and by troubling gaps in how regulations are designed and enforced—such a label can help informed consumers who have economic means avoid some exposures.

Moreover, labelling does not stop the chemical industry from replacing a chemical that requires labelling with another unmonitored chemical. In California, after the change to the flammability standard and with the use of labelling, some kinds of chemicals, like PBDEs and TDCPP, decreased in upholstered furniture decreased across the United States.  However, the use of alternative flame retardants, such as TBPP and TCIPP increased, while products containing FM550 stayed the same. In Canada, as new replacement flame retardants are substituted for the now regulated PBDE and HBCD, there will be an inevitable lag before scientific studies can assess their possible toxicity.  Canada could go even one step further than California and require the labelling of all products, and not just upholstered furniture, for the presence of flame retardant chemicals.

Although labelling is a limited solution to a flawed regulatory system, it may help us track and advocate against the ongoing substitution of one harmful chemical for another. What labelling can do is provide researchers, consumers and organizations with data about the changing distribution and nature of flame retardant chemicals. Labelling can also help people to recognize sources of their exposures. It can also provide opportunities for some people with financial means the opportunity to reduce their exposures in their own homes.  Working within a flawed environmental regulatory system, labels can thus be a tactical way to monitor the activities of manufacturers and gather data on the ever shifting presence of synthetic chemicals

Labeling isn’t enough. in practice, it can only do so much. Ingredient labeling in the absence of the prohibition of toxic substances puts the onus on people to protect themselves as individual consumers. But we live in a complex and entangled world: no one person can build an environment safe from toxic chemicals.  Infants cannot make “informed” consumer choices, and limited access to financial resources constrain many people’s ability to purchase safe products.  Thus, labeling can exacerbate disparities in exposure even as they reduce exposures for some. Labeling alone will not prevent ubiquitous exposures to flame retardants – especially as no one can control exposures built into public spaces — but it may help to reveal the extent of such exposures and the inadequacy of our current regulatory approach.

EDAction is a coalition of researchers concerned with the widespread presence of endocrine disrupting chemicals in bodies, commodities, built environments, industrial emissions, ecologies, waters, and atmospheres. EDAction researches ways to improve Canadian toxics governance and seeks to advance critical discussions about the regulation, science, and monitoring of endocrine disrupting chemicals guided by the values of reproductive and environmental justice.