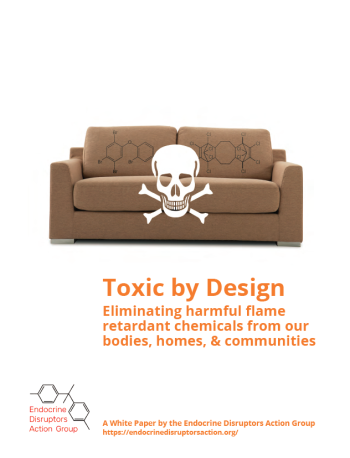 regulations to keep harmful flame retardant chemicals out of Canadian homes and consumer products, and makes recommendations to prohibit new exposures to these chemicals.

Toxic By Design investigates how failures in Canada’s regulatory approach to industrial chemicals—including a new regulation on a class of toxic flame retardants called PBDEs that will come into effect on December 23, 2016 – have far-reaching effects on the health of Canadians.

While fire safety is a serious concern, scientific research has shown that these chemicals do not significantly improve fire protection. Flame retardant chemicals do present serious risks, however, particularly for children and during fetal development. Among other concerns, the health effects of exposure to these chemicals include enlarged livers, obesity, high blood pressure, heart disease, stroke, cognitive debilities, reduced fertility in both men and women, and certain cancers.

Toxic By Design calls on the Canadian government to address failures in governance that are impacting the health of Canadians, both those living today and future generations.

Toxic By Design is the first in a series of reports on the impacts of endocrine (hormone) disrupting chemicals in Canada.

EDAction is a coalition of researchers concerned with the widespread presence of endocrine disrupting chemicals in bodies, commodities, built environments, industrial emissions, ecologies, waters, and atmospheres. EDAction researches ways to improve Canadian toxics governance and seeks to advance critical discussions about the regulation, science, and monitoring of endocrine disrupting chemicals guided by the values of reproductive and environmental justice.